The other day, I was at the Green Festival in San Francisco, and I overheard someone talking about a giant island of plastic in the Pacific ocean, "Twice the size of Texas."

I'd heard a few things about it, but didn't know much, so I thought I'd look into it. Turns out that it may or may not be the size of two Texases, as no one's got an official measure, but it sounds huge. And deadly.

The Earth, as some of you may know, is round, and spinning. Because of factors such as solar heating, the shape of land masses and the inertia of water, several large, perpetual currents exist in our oceans, and their existence has a strong influence on things such as weather, water temperature, migratory routes, and human trade and military activity.

As you can see, what's created are essentially giant eddies, circular water flows with relatively stationary centers. One in particular is the North Pacific Subtropical Gyre (we'll call it the NPSG), with an area of approximately 10 million square miles.

The currents of the ocean can have a profound effect on the atmosphere above, as the temperature and flow of water can affect ambient air temperature, humidity, wind, and precipitation. The NPSG is no exception. The center of this gyre is also known as the "horse latitudes," because shipping vessels hundreds of years ago would run into dead air and wouldn't be able to fill their sails. After weeks sitting in the same place, they would end up dumping their livestock, including horses, into the water, in an attempt to lighten the load and move along. Must've been good eats for the sharks.

(Edit: Another, more verifiable etymology for the name "horse latitudes" is from an old tradition of throwing a straw-stuffed effigy of a horse off the side of the ship in celebration of a sailor's having worked off a debt to the ship's paymaster. Since these debts were frequently worked off halfway across the ocean, this became the place for the practice. How interesting that the practice of dumping things in the middle of the ocean continues to this day...)

Turns out, the same current and weather patterns that trapped ships long ago is now having the same effect on human wastes. Over the last few decades, a giant mass has been accumulating at the center of this vortex, composed of trash generated by oceangoing ships, runoff from terrestrial storms, broken fishing nets, and lost cargo from big storms. One of the most dangerous components of this flotilla of flotsam is the large amount of plastic.

Plastics, including polyethylene and polypropylene, are synthetic polymers that have remarkable strength, flexibility, and durability. They're used extensively in every aspect of modern civilization, from cars to medical devices to naughty toys. It is their durability, however, that causes the problem.

One of the chemical properties of these polymers is that they absorb and give off different chemicals, some of which are nonylphenols, PCBs, and the infamous DDT. When plastic in the ocean is eaten by living organisms, the toxic chemicals within are released into that organism. In phytoplankton, toxic chemicals are consumed and then passed long the food chain up to higher trophic levels, and the concentration of these chemicals increases exponentially at each level, in a process called biomagnification. Following the diagram above, replace the porpoise with a person, and consider how people are truly integrated in the global ecosystem.

The amplification of these toxins can have profound effects on higher organisms. In the case of DDT, the accumulation in birds makes their shells weaker, and so, when attempting to incubate their prospective young, the parent birds inadvertently crush the eggs, destroying any hope of a subsequent generation.

Also perilous for those birds, such as this late albatross, small plastic objects look like food, but lack the same nutrients: 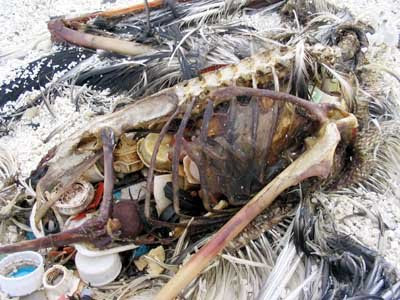 Due to the nature of its currents, the NPSG has been collecting and consolidating in its center vast quantities of these non-biodegradable plastics, which in turn have been able to amass and release large amounts of toxic substances into the oceans and the food web. Scientists have named this area "The Great Pacific Garbage Patch," and have been researching it with greater interest. With time, we'll be able to figure out exactly how big it is, and hopefully figure out a way to clean it up.

But is it an island? As it turns out, no. It's actually worse than that. Instead of being a giant floating island of plastic trash, the center of the NPSG is actually more like a dilute soup of plastic pieces big and small, intermixed with all of the living phytoplankton and zooplankton. This makes it that much more difficult for plankton-grazers to get nutritious food without picking up little pieces of plastic. It also means that it's that much more difficult for us to figure out how to get the plastic out of the ocean without taking out tons of marine life as well.

One of the best resources on all of this is the Algalita Marine Research Foundation. Here is a series of Plastics in the Enviroment (PDF) handouts that details this stuff in an easy-to-read format. There, you can also check out the Action sheet on plastics (PDF) and What you can do about plastic pollution (PDF).


Let me know if you have any more questions or insight, I love feedback.

[This post has been revisited and re-edited in light of new understanding and research, so as to be as factually accurate as possible. PH 11/7/11]
Posted by Patrick Hilton Flanagan at 17.11.07

I got an email from my uncle Mark, a flight surgeon in the Navy, regarding his experiences with ocean flotsam:

"When I was in college, I spent two months at sea aboard a research vessel in the Caribbean. Each day at noon and midnight, we towed a Neusten net (a 1 meter square net with a fine mesh net) on the surface for 1 NM. We would get fish larvae, baby eels, Sargasso weed etc. Every couple of days we would get little balls of tar from oil spills but each and every tow yielded some form of plastic. The two main culprits were the cheap netting mentioned in the article and little beads (~3-4mm in diameter. These beads were packed into cargo ships either as ballast or as a cheap way to move plastic. (In the bead form it can be poured into the hold much in the same manner as grain). That was twenty years ago in an area off the major sea lanes.
These days, floating in the Persian Gulf, I can see lots of plastic (along with other forms of flotsam). It is such a narrow body of water, which is packed with traffic and industry.
While nothing is perfect, to their credit, the Navy separates all of their plastics and we have a machine on the carrier that compresses all the plastic waste into big hockey puck looking discs. These are stored until we either transfer them to a supply ship during an underway replenishment or to the pier. No plastic is jettisoned.
Funny enough, I have been seeing a lot of dolphins lately. (We do still launch a lot of uneaten chicken wings overboard).
While this paper focuses on the North Pacific gyre, all the major oceans have a similar "eddy" in the middle (e.g. Sargasso Sea in the North Atlantic). I would imagine that the N.P. one would be worse though because 1) higher traffic levels between Asia and North/South America and 2) it's going to be noticed more as Hawaii is in the middle whereas there is no similar population center in the middle of the North Atlantic."

The paper he's referring to is the one I originally sent out in an email, and can be found at

jeez....this is pretty terrifying. thanks as always for dropping the science. xo-gg

thanks so much for the info. and all the links, it's really great to be aware of these things; even though most of us don't realize that any of this stuff is going on!

thanks so much for the info, good resource for my project.

very inspiring research....I'll start my very own spanish blog on ecology soon. congratulations and please continue delivering eco and green articles than can save us and save the planet. Tip: there's a book called "hercolubus or red planet" written by VM Rabolu that is critical to read, they'll send it to you free of charge at www.planetahercolubus.com there;s a little time to change
thanks

Newer Post Older Post Home
Subscribe to: Post Comments (Atom)
"Keep close to Nature's heart...and break clear away, once in awhile, and climb a mountain or spend a week in the woods. Wash your spirit clean."